70 AD — One Of History’s Most Important Dates

70 AD was an awful year–yet extremely significant in world history. That was the year Roman armies defeated and destroyed the city of Jerusalem. Then they sacrificed a pig in the Jewish temple and totally demolished and flattened both the city and the temple. In the process they slaughtered more than a million Jews and drove all the rest out of Israel. This was written about by Roman/Jewish historian Josephus who was an eye witness to it.

So why is 70 AD an important date: 1) When the Jewish temple was demolished, that was the end of Old Testament Judaism. Never again in history have the required animal sacrifices been offered in the “Holy of Holies” in God’s Temple. That event totally changed the application of the Old Testament to Jewish and Gentile life. After 70 AD there was no longer an animal sacrifice for our sins.

2) The events of 70 AD also drastically effected the early Christians by greatly reducing the influence of Judaism and Jewish rituals on Christianity.

The book of Hebrews says animal sacrifices are still going on–therefore it had to be written before 70 AD. Paul had great verbal battles with Jewish Christians that wanted all new believer’s to be circumcised–if the Temple had been destroyed before Paul was writing, wouldn’t he have used that as a great argument for his cause.  Paul had to be writing before 70 AD. In fact, all the New Testament books must have been written before 70 AD, because no New Testament writer could have left out such an awesome event if it had happened before his writing.

70 AD shouts — “THE NEW TESTAMENT WAS WRITTEN BEFORE THE DESTRUCTION OF THE TEMPLE BY EYEWITNESSES OF JESUS’ EARTHLY LIFE AND IS VERY RELIABLE!” So since we have such an awesome witness of God’s working in our world, shouldn’t we devote some time to reading it?

Here’s a challenge:  For the next 3 weeks (21 days) read the New Testament at least 5 minutes a day. Get it? Got it? Good. It will amazingly improve your life if you do it.

Was history predestined? Check out this video: https://www.youtube.com/watch?v=R4QiCf0NGZI&t=45s

Check out my new book, Beyond Church — An Invitation To Experience The Lost Word Of The Bible — Ekklesia; available at Amazon. 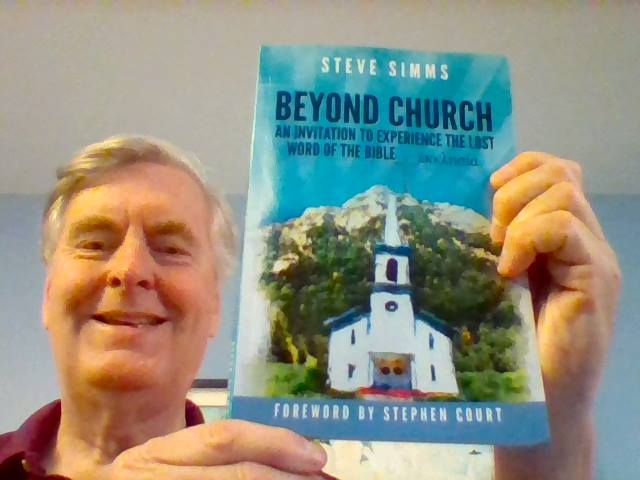 I like to look and think outside the box. In college I encountered Jesus Christ and I have been passionate about trying to get to know Him better ever since. My wife and I long to see the power and passion of the first Christ-followers come to life in our time. I have written a book about our experiences in non-traditional church, called, "Beyond Church: An Invitation To Experience The Lost Word Of The Bible--Ekklesia." If you need encouragement, search for: Elephants Encouraging The Room and/or check out my Amazon author page. Thank you!
View all posts by Steve Simms →
This entry was posted in apologists, Creator, God, history, Jesus Christ, religion and tagged 21 days, 3 weeks, 5 minutes a day, 70 AD, a million Jews, animal sacrifices, blood, book of Hebrews, challenge, Christianity, circumcised, city, date the writings, demolished, destruction, discredit, end, eye witness, Gentile, Get it? Got it? Good., God's, historian, Holy of Holies, improve your life, Israel, Jesus Christ, Jesus' earthly life, Jewish rituals, Jewish temple, Josephus, k 90 AD, life, most important date, New Testment, Old Testament Judaism, Paul, radical, read, reading, reducing the influence, reliable, Roman, Roman armies, sacrificed a pig, second century, sins, surrounded Jerusalem, the early Christians, third, world history. Bookmark the permalink.