Soaking prayer is a way of seeking God. The term soaking is a fresh way of talking about the traditional Christian practice of contemplative prayer which has been taught and used though out the history of the church. Soaking prayer involves quietly listening to soft, worshipful music (soaking music), often while laying flat on the floor; while also being aware of and attentive to the presence and promptings of God. It has also been called listening prayer.

The principle of soaking/contemplative prayer is found in both the Old and New Testaments. King Saul had the young (future king) David play worship music to soothe his soul. The prophet Samuel would say to God; “Speak, Lord, for your servant is listening,” and then quietly wait and listen to what God would tell him.

Before He ascended into Heaven, the living, resurrected Jesus instructed his first followers to “tarry in the city of Jerusalem, until you are endued with power from on high.” In the early 1900s the early Pentecostals called it “tarrying” — taking the time to wait for and seek God’s supernatural presence and power.

At the end of church services or conferences, some Christian groups invite people to the front of the room for an altar call, where they are prayed for. The Vineyard Movement expanded the concept of altar call by allowing it to continue (sometimes for hours) while a band or individual played and sang quietly to provide a spiritual atmosphere both for the people receiving prayer and the ones praying

Rather than presenting God with a list of our wants and/or needs, soaking prayer focuses on opening ourself up to intimacy with the living God, Himself.  Instead of us doing all the talking to God, soaking prayer creates an atmosphere where we can actually hear God’s voice and His promptings, thoughts, ideas, images, Scriptures, impressions, etc.

Craig von Buseck describes soaking prayer like this: “Soaking prayer is often referred to as an inward journey in the Spirit. In simple terms, it’s just ‘hanging out’ with Jesus, and letting Him do whatever He wants to do in our lives.”

Soaking music (the music that usually accompanies soaking prayer, sometimes called psalmistry) is a recent genre of Christian music. When played and sung live, it is usually spontaneous and free-flowing as led by the Holy Spirit.

Julie True of Nashville is a leader in the soaking music movement. She and her family endured a long season of much struggle and difficulty in their life. During those trying times Julie began to play and sing spontaneous songs to the Lord. At one point, Julie and her family were living with another couple, Bill and RoseMarie Haire, who had a grand piano.  Julie began to regularly play and sing spontaneous songs to God and RoseMarie would lay on the floor under the piano and soak. 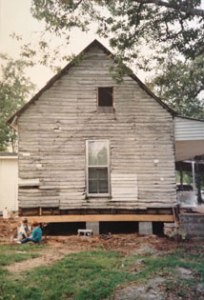 The home where Julie True and her family lived during the hard times.

As they continued the practice, they both began to realize that they were gradually being transformed from within. One day RoseMarie said to Julie, “What you are doing is going to go around the world.” Today’s Julie’s soaking music is impacting people world-wide and has been featured on Sid Roth’s It’s Supernatural TV show.  Julie’s music is available at her web site: julietrue.com. She leads a weekly soaking session at Grace Center in Nashville. She explains soaking prayer this way: “We just show up and step into God’s flow.”

“Stepping into God’s flow” and allowing the Spirit to spontaneously lead a prayer session or worship gathering is extremely powerful and enriching. It transforms church into a God-gathering (a direct meeting with God, Himself) and makes church contagious.

Moving beyond soaking prayer into a Spirit-led God-gathering requires only one simple step: allowing the people present unrestricted freedom to verbally share in the meeting, whatever they have receive while soaking, as they are prompted by the Spirit. Thus Spirit-led God-gatherings allow different individuals to publicly share with the others present in the room, whatever God has shown them. This creates a spiritually contagious atmosphere through out the room.

Soaking prayer is not a once-and-done cure-all. Soaking prayer is just one aspect of spiritual growth (spiritual formation) and is most effective when it is practiced along with other spiritual disciplines. Julie True puts it this way:  “Sometimes I find myself beginning to listen again to the voices of fear and doubt in my head, or the replaying of tapes telling me all that I’m not and never will be. I have found that this usually happens when I’ve been isolated from life-giving people for too long, out of touch with the Word of God, or when I’ve stopped serving and helping others.”

Spirit-led God-gatherings give us the opportunity, not only to be around “life-giving people,” but to actually experience and be encouraged by what God is telling them, as they openly show and tell what God has done.

If you would like to experience a Spirit-led God gathering in Nashville that has been held every Sunday morning since March 2008 at The Salvation Army Berry Street, 225 Berry St., Nashville, TN 37207 at 10:45.  Come and hear life-giving people share their stories!

I like to look and think outside the box. In college I encountered Jesus Christ and I have been passionate about trying to get to know Him better ever since. My wife and I long to see the power and passion of the first Christ-followers come to life in our time. I have written a book about our experiences in non-traditional church, called, "Beyond Church: An Invitation To Experience The Lost Word Of The Bible--Ekklesia." If you need encouragement, search for: Elephants Encouraging The Room and/or check out my Amazon author page. Thank you!
View all posts by Steve Simms →
This entry was posted in charismatic movement, church history, church movements, contemporary Christian music, Craig von Buseck, hanging out, hearing God's voice, It's Supernatural, King David, King Saul, listening prayer, Nashville, organic church, participatory church, Pentecostal movement, Salvation Army, Sid Roth, soak in prayer, Speak Lord for your servant is listening, tarry in Jerusalem, tarrying, Tennessee and tagged Christian music, contemplative prayer, Julie True, prayer, psalmistry, quotes, soaking music, Soaking prayer, Vineyard movement. Bookmark the permalink.