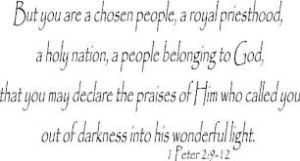 “Let everyone, therefore, who knows himself to be a Christian be assured of this, that we are all equally priests.” –Martin Luther

“We must reveal God’s name to each other and proclaim the name of God to our brothers–not in some corner but in the midst of the congregation . . . Everyone needs the other, especially since God’s gifts are diverse and since no one has them all.” —Andreas Karlstadt (An associate of Martin Luther who tried to take the priesthood of the believer further than Luther wanted it to go.)

“One ought to contemplate God’s word and step forward and proclaim it to one’s companions. We ought to sharpen God’s word which is to bring its masterful content to the neighbor. This is a common commandment addressed to all who are able to understand God’s word, for through this commandment God has appointed all to be priest to whom He has revealed Himself. Here no one is excluded.” –Andreas Karlstadt

“Every Christian is a minister. One enters the ministry by coming into Christ. That which makes one a child of God makes him a minister of God.” –Carl Ketcherside

“No careful student of the early congregation of believers can fail to be impressed with the simplicity of its worship and functioning. Imbued with a fervent zeal, motivated by a common purpose, possessed of a deep love for each other, ‘all the believers kept together’ and ‘among all those who had embraced the faith there was but one heart and one soul’ (Acts 2:44; 5:82). In such a company each felt under compulsion of spirit to do all he could to edify his fellows. None served for gain.” –Carl Ketcherside

“The priesthood of all true believers is clearly and emphatically taught in the New Testament (1 Pet. 2:5-9; Rev. 1:6). It is seen in practice in all the order and functioning of the New Testament churches. However, in the church order of today it is rejected.” –Alexander Hay

“In the structure which Christ gave to His church, the authority is always directly in His hands and the power comes directly from Him. This is made very clear in Matt. 18:15-20 and many other passages. He placed the responsibility for knowing His will and obeying His Word directly upon the whole congregation gathered together, a gathering of priests, all equal, and equally responsible, through the different ministries and gifts of the Spirit, and they were directly responsible to Him. Each one individually is responsible to know His Word and will, and obey Him.” –Alexander Hay

“Most Protestants pay lip service to the Reformation doctrine of the priesthood of every believer, but they do not thereby mean to say that every Christian is a minister. Many hasten to add that all they mean by the familiar doctrine is that nobody needs to confess to a priest, since each can confess directly to God. The notion that this doctrine erases the distinction between laymen and ministers is seldom presented seriously, and would, to some be shocking, but it does not take much study of the New Testament to realize that the early Christians actually operated on this revolutionary basis.” –Elton Trueblood

”I believe a very large majority of church-goers are merely unthinking, slumbering worshipers of an unknown God.” -Charles H. Spurgeon

”Jesus didn’t leave us with a system He left us with his Spirit. He gave us His Spirit as a guide instead of a map. Principles alone will not satisfy your hunger. That’s why systems always promise a future revival that never comes. They cannot produce community because they are designed to keep people apart.” -Dave Coleman

”I can say without qualification that ‘church’ as we have known it, done it, attended it, and invited others into it, is the single greatest distraction and hindrance to spiritual growth that I know of. It is a distraction from Jesus because it claims to represent Jesus when it actually misrepresents Him.” -Chip Brogden

”In this crucial hour in earth’s history the Holy Spirit of God is leading those who have an ear into a new dimension of revelation and glory. Any return to the status quo, business-as-usual church will sound the death knell to the desire of the Spirit of God.” -Greg Austin

The unity of the Spirit is one of community, not conformity; of diversity, not uniformity. It is rooted in mutual love, not dogmatism; in freedom, not in slavery. Our peace is a person, not a plan or a program! Carl Ketcherside

I like to look and think outside the box. In college I encountered Jesus Christ and I have been passionate about trying to get to know Him better ever since. My wife and I co-lead a non-traditional expression of the body of Christ in Nashville based on open participation and Spirit-led sharing. We long to see the power and passion of the first Christ-followers come to life in our time. I have written a book about our experiences called, "Beyond Church: An Invitation To Experience The Lost Word Of The Bible--Ekklesia" that is available in Kindle & paperback @ http://amzn.to/2nCr5dP
View all posts by Steve Simms →
This entry was posted in Alexander Hay, Andreas Karlstadt, Austin Sparks, Carl Ketcherside, Charles Spurgeon, Chip Brogden, clergy laity, Dave Coleman, Elton Trueblood, Greg Austin, laymen, laywitness, Martin Luther, who can preach, women in ministry and tagged organic church, priesthood of the believer, Protestants, quotations, royal priesthood, universal priesthood. Bookmark the permalink.