Noah is a 21st Century Hollywood movie directed by Darren Aronofsky and staring Russell Crowe.  It is an entertaining and gripping story.  I desperately needed to go to the bathroom (after seeing all that water) but I choose to sit, glued to my seat, and risk flooding the theater, because I didn’t want to leave the story for even 5 minutes. 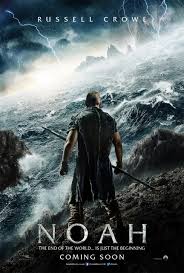 Noah gets abortion right.  It presents the idea of killing an unborn baby as a horrendous thing.  After Noah decides to let his twin granddaughters live, rather than killing them, his daughter-in-law tells him:  “You chose life.”  Perhaps our society should take that to heart and remember the millions of unborn babies who have been silently and mercilessly killed during the last 50 years since Roe vs. Wade.

The movie Noah nails the reality of wickedness.  It presents mankind as so sinful that God needs to use a radical remedy — starting over.  However, it doesn’t fall into the trap of dividing mankind into good and evil.  Noah realizes that he and his family are also evil.  Speaking about wickedness, Noah tells his wife, “It’s in us, too.”  The movie agrees with the biblical truth that “all have sinned and fallen short of the glory of God.”

Noah gets origin of the Universe correct.  Noah’s telling his family about creation, pretty much matches the Genesis account.  And he continually refers to God as Creator.  Thus the movie successfully avoids the time-plus-nothing-equals-everything formula embraced by much of contemporary, secular society.

The movie, Noah, is monotheistic.  Like the Bible, it believes in only one God.  However, it does throw in some unbiblical rock stars (strange beings that it calls Watchers), fallen angels with giant rock bodies.  These rock stars help Noah and family build the ark and then fight off a bunch of people to protect it.  (They look kind of like the giant robots in Star Wars.)  It also throws in a forest suddenly appearing out of nowhere.

Noah gets Ham wrong.  Near the end, the movie, Noah deals with the so-called Curse of Ham, which is a distortion of Scripture that was used to justify racism and slavery for hundreds of years.  Here’s the full story of the Curse of Ham.

In the movie Noah misunderstands God’s intention and thinks that God only wants to save the animals, but wants mankind to die out with his immediate family.  Therefore the movie gives Shem a wife but, unlike the Bible, presents Noah’s two other sons, poor Ham and Japheth as unmarried with no choice but celibacy (at least until their newborn nieces grow up).

I enjoyed Noah.  It both entertained me and made me think about God and faith.

I like to look and think outside the box. In college I encountered Jesus Christ and I have been passionate about trying to get to know Him better ever since. My wife and I co-lead a non-traditional expression of the body of Christ in Nashville based on open participation and Spirit-led sharing. We long to see the power and passion of the first Christ-followers come to life in our time. I have written a book about our experiences called, "Beyond Church: An Invitation To Experience The Lost Word Of The Bible--Ekklesia" that is available in Kindle & paperback @ http://amzn.to/2nCr5dP
View all posts by Steve Simms →
This entry was posted in abortion, Bible, biblical, Biblical concept, creation, creationism, Creator, Curse of Ham, evil, good and evil, Ham, Hollywood, Japheth, judging, judgment, judgments, monotheism, Noah's ark, Row vs. Wade, sin, sinner, sinning, the flood, unbiblical, Watchers, wickedness and tagged blog, Darren Aronofsky, movie Noah, movie reviews, Noah, religion, Russell Crowe. Bookmark the permalink.